Sync every time you open or save the database (unless you don’t want to!).

Temporarily Disable with the Shift Key

Hold down the Shift key then run the KeePass Save or Open command to bypass Auto Sync for the current command.

KeePass’ auto-lock and related features interfere with the operation of the Auto Sync on Save option. To help ensure minimal impact to Auto Sync operations, the plugin implements a “deferred sync” option when the condition is detected.

Windows offers several built-in login security features, including automatic idle and other event-based screen locks. When paired with secure login credentials, these features may be useful alternatives to KeePass' auto-lock.

KP auto-lock automatically closes databases as a security precaution, based on several configured criteria (for example, when an idle timer elapses). When there are unsaved changes to the database and auto-lock is engaged, KeePass runs its Save command to save the changes. Unfortunately, KeePass immediately closes the database after this implicit Save is complete, preventing the plugin from performing its Auto Sync.

Even though Auto Sync on Save is enabled, the plugin cannot sync the database before KeePass closes it, especially if the auto-lock is performed as part of another security operation, such as a screen lock. The KeePass “save changes on exit” feature is another source of this problem, since not only is the database closed - the KeePass program itself is terminated.

Fortunately, there is another alternative. The plugin is able to detect situations where the sync cannot be performed. When such events occur, the plugin marks the database, prior to the save, as a reminder that Auto Sync was preempted. When the database is subsequently reopened, the plugin can either:

The first option will display the message below when an auto-locked or saved-on-exit database is reopened. Usually the safest response is to click Yes, however you may be aware of changes sync’ed on other devices that might cause interference. Clicking No allows you to review the contents of the database before syncing later: 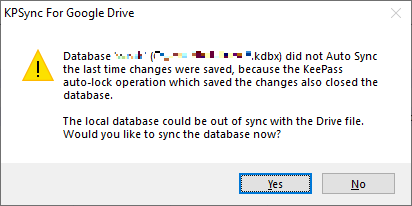 To have the plugin perform deferred sync ops automatically when the database is reopened, enable the Resume on return from Auto-Lock option. Essentially this is the same as the plugin automatically clicking Yes to the dialog above. You can select this option on the Configure dialog as shown:

Disabling the resume option causes the plugin to revert to showing the message window each time the deferred sync condition is detected upon reopen.