KeePass displays the message below (only once) the first time the plugin detects that a database is configured to use one of the legacy authorization methods. The check occurs when you use or configure the plugin. 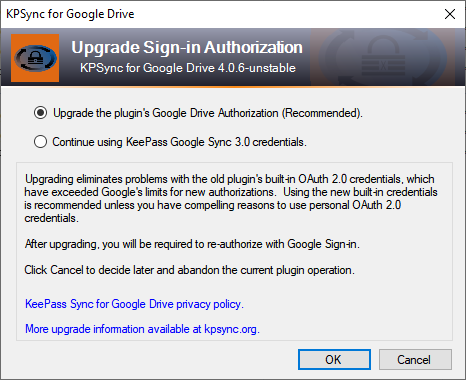 If you do not encounter this message, it’s all good; continue using the plugin with the assurance that you are up-to-date.

KeePass Google Sync 3.0 served us well for many years, but it didn’t keep pace with the modern Google Drive API. Filling that gap and retaining compatibility was the founding motivation for this project.

Why This Upgrade Is Recommended

The upgrade allows users to access their Google Drive accounts, through the plugin, without restrictions. This is important because otherwise the plugin cannot ensure that it accesses the same KeePass file that other KeePass programs do, especially other programs running on say, Android devices. This can result in inaccurate synchronization or inadvertent data loss, making the plugin much less than useful.

Upgrading is voluntary. If you currently have no problems synchronizing your databases, you may want to postpone it. Then, when you eventually do have problems related to Google Sign-in, you can either manually upgrade, or try your luck with the one of the workarounds.

We know that trusting software to not abuse its access to your Google Drive account can be a leap of faith. But we believe that the the power of open source software protects you. The plugin will never delete data or access files other than the ones you specify to synchronize with your KeePass database.

What App Credentials Are and Why They Changed

The plugin’s built-in app credentials, used to interoperate with Google Sign-in interfaces, allow you to authorize the plugin to access your Google Drive account.

Google requires that app credentials be authorized by a verification process. The old plugin cannot pass this test for several reasons:

As a result, synchronizing new databases using the old plugin’s app credentials is not possible. Some users unexpectedly find that their databases are no longer usable without workarounds provided by this and the previous plugin.

Unfortunately, workarounds like personal credentials, or “limited access” authorization, bring their own difficulties, such as file duplication and complex configuration steps, which most users, and especially new users, would rather not endure.

The Google-verified, built-in credentials used by the new plugin are not subject to the quota limits and security warnings which can occur with “personal” OAuth 2.0 credentials. And unlike the legacy plugin credentials, the new built-in credentials actually work, with your explicit consent, in new database configurations, and in databases with revoked authorization tokens.

If you upgrade, the plugin will from then on use its own, Google-verified OAuth 2.0 credentials each time it uses the Google Drive API.

The upgrade also removes any current authorization token obtained either by the old plugin, or by this plugin via the workarounds. Again, if you currently don’t have synchronization problems with the new plugin, you can elect to ignore the upgrade now, while still retaining the option to manually upgrade later. You will only be nagged by the above message once.

But whether you do it now or later, the new credentials will require re-authorization, so you will be prompted to authenticate your account with Google Sign-in when you run a sync command after the upgrade.

If you want to upgrade to the new credentials manually, simply open the Configuration dialog, disable “legacy credentials” as shown below, and click OK.

The next time you synchronize, you will have to authorize via Sign-in, just as you did the first time you used the database.