Users are advised to avoid using KeePass v2.48. If you have KeePass v2.48 installed, we recommend upgrading to v2.48.1 (or later) immediately.

If you experience the problem outlined in this document, please try the workaround given below, to possibly recover your database changes. Before using the plugin again, upgrade or downgrade KeePass from v2.48. If that is not currently a viable option, discontinue using the plugin.

If you experience this problem, you may be able to recover the database by following the steps outlined below.

Use a Different KeePass Release

Users of KeePass v2.48 should upgrade to KeePass v2.48.1 or later immediately to continue using the plugin safely. Though not recommended, you may also consider installing an earlier or later KeePass release.

The defect affects all plugin releases from v4.0.5-beta. As of the 4.1 release, the plugin supports KeePass releases v2.35 through v2.50. Though not recommended, you may also consider installing a plugin release prior to v4.0.5-beta.

You may encounter a KeePass error message similar to the following after a Save operation. 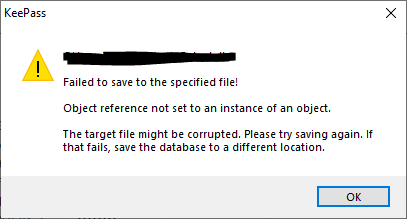 Note that any outstanding changes to the database are not saved, and cannot be saved without intervention. Further, note that Save may be invoked implicitly in KeePass composite operations such as “auto lock” and “save on exit”.

If you see the error message above after using the plugin, please try the following steps to avoid losing your changes.